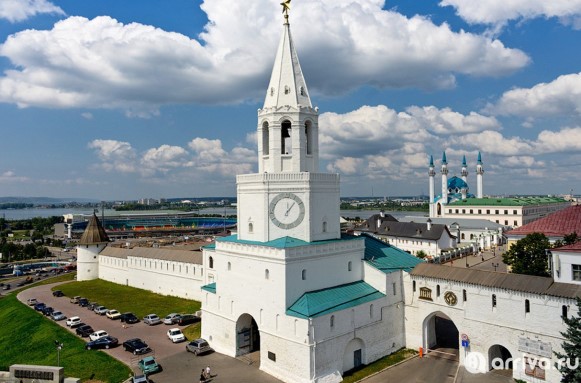 The Spasskaya Tower of the Kazan Kremlin is its main travel tower and architectural monument of the 16th century. It is located in the eastern wall of the Kremlin and overlooks May 1.

The Spasskaya Tower is a four-tier white-stone building with a height of 45 meters and a width of 23 meters. Each 2 lower tiers are quadrangular; in the lowest tier there is a direct arched opening for entry into the Kremlin. The third tier of the tower is octagonal, and the famous clock is located on it. The fourth - the last tier of the tower - is also octagonal, has large arched openings on each side and serves as a belfry. The structure of the building is completed by a brick tent with a five-pointed gilded star at the top.

The tower was built in 1556-62. by two architectors -Postnik Yakovlev and Ivan Shiryem. At that time, the Spasskaya Tower was a two-story building with a wooden roof and a sentinel towerSpasskaya Tower has suffered from fires more than once. After one of them, which occurred in 1694, and which burned the tower almost to the bottom, its building was completely reconstructed. In particular, 2 more tiers of the tower were added, and the roof turned from wooden to brick.

In the 18th century, a clock “with a ringing” and a dial rotating around fixed arrows were installed on the tower. In 1780, the watch was replaced with a new one, with a classic dial design. 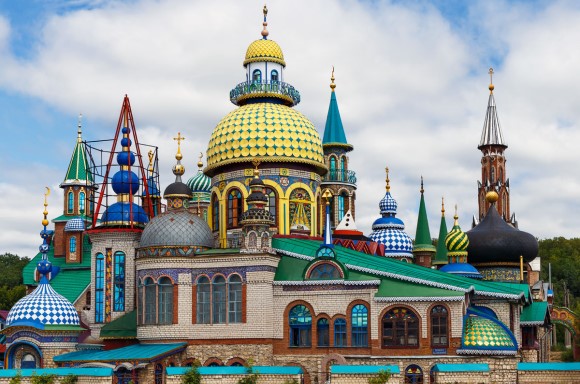 Temple of all religions

The temple of all religions is also the universal temple, the international cultural center of spiritual unity that is situated in the village of Old Arakchino in Kazan, dedicated to different religions of the world. It is the only such in the world a popular attraction of the city.

The history of this" world " temple dates back to 1992. The author of this architectural work is an artist, architector, sculptor, healer and public figure is Ildar Khanov. The brilliant idea came to him after his travelling to Tibet and India, where he absorbed the goals and ideas of Germanization and monotheism.

This unique architectural complex includes all major religions: Orthodox and Catholic Church, Muslim mosque, Jewish synagogue, Buddhist monastery, Chinese pagoda, and many other religious elements, including those that do not exist today.

At the moment, the complex has: Egyptian and Catholic halls, Tea room and Hall of Jesus Christ, Theater hall, Art gallery. Their interiors are decorated with works of monumental painting and decorative arts. 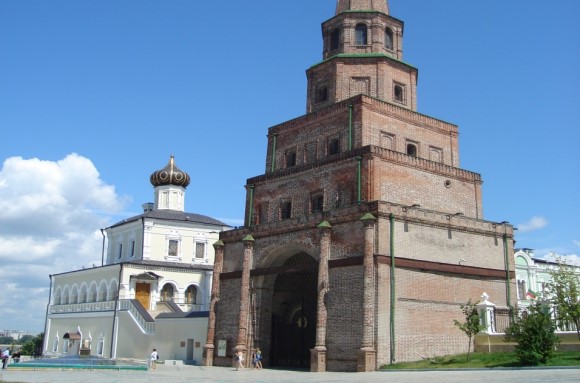 Russia has its own leaning tower and it is located in the capital of Tatarstan. This is the Syuyumbike watchtower. The spire of the structure deviates from the vertical by 1.98 meters. Historians still argue about the period of construction, agreeing that it was built between 1645-1650 years. The tower is located in the Northern part of the territory of the Kazan Kremlin. The total height of the building is 58 meters. The building is associated with many legends and stories and our guides will tell you detailed about that.

You can look at the falling tower and take a picture against its background, on a tour of the Kazan Kremlin. A beautiful architectural structure delights tourists not only during the day, but also at night, when it lights up in bright light with the help of powerful spotlights. On the territory of the Kremlin you can buy souvenirs depicting one of the main attractions of the capital of Tatarstan. 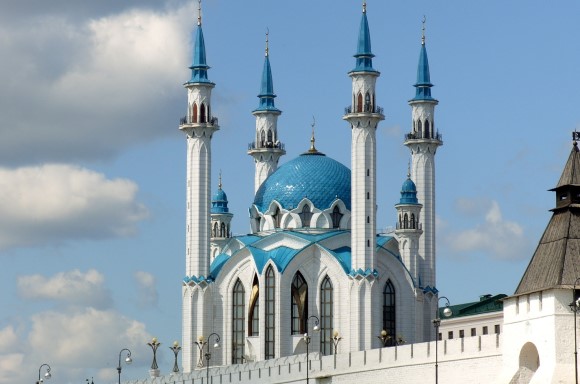 Kul Sharif mosque the main Cathedral Juma-mosque of the Republic of Tatarstan and the city of Kazan (since 2005) located on the territory of the Kazan Kremlin; one of the main attractions of the city.

The construction of the temple was started in 1996 as a recreation of the legendary multi-minaret mosque of the capital of the Kazan khanate, the center of religious education and development of Sciences of the Middle Volga region of the XVI century. The historic mosque was destroyed in October 1552 during the storming of Kazan by the troops of Ivan the terrible. The reconstructed mosque is named in honor of the last Imam Syed Kul Sharif, one of the leaders of the defense of Kazan.The mosque is located in the western part of the Kazan Kremlin. 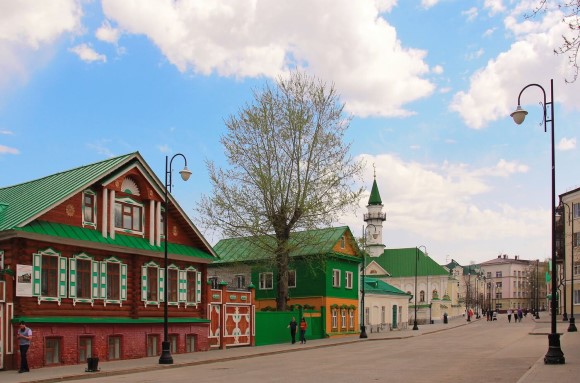 Staro-Tatarskaya Sloboda so was named of the place on the shores of Lake Kaban, where the indigenous Tatars began to settle after the final conquest of the Kazan Khanate by the Russian Tsar Ivan the Terrible. At different times, prominent representatives of the Tatar culture, intelligentsia and clergy, industrialists and manufacturers lived here.

Now Staro-Tatar settlement is a quiet corner among a large and crowded city with very beautiful multi-colored wooden and stone houses, which makes it possible to get acquainted with the history of the Tatars, their customs, culture and traditions.

The origin of the name of the region dates back to the 17th – 18th centuries, when in Kazan was a division into the Tatar part of the city and into the Russian. At this time, many architectural masterpieces of Tatar masters were built on the site of the settlement, including a large number of mosques. The inhabitants of the settlement had their own way of life, their values and culture. The center of the district was the Haymarket and Haymarket, as in any eastern city. This division continued until the 1917 revolution.

Today, dozens of different buildings are included in the ensemble of historical buildings of the Staro-Tatarskaya Sloboda: these are residential merchant houses, mosques, shopping arcades, restaurants with national cuisine.

A tour of the settlement allows any visitor to the city to learn more about the life of local residents in those days. Each house here has its historical value and shows the life of its owner and its rich history. 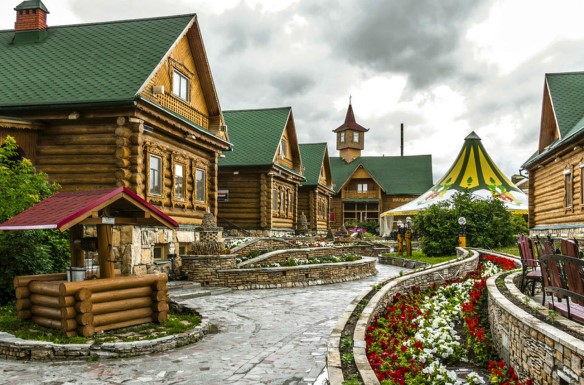 The Tatar village "Tugan Avylym", located in the center of Kazan, combines the advantages of an ethnographic open-air museum and an entertainment center. Residents and guests of the city have the opportunity to immerse themselves in the rural atmosphere and learn about life and crafts, without leaving the metropolis. “Tugan avylym” means “native Tatar village”. Inside are lovely, neat little houses decorated in a national style with household items, wells, fences, apiaries and mills.

In "Tugan avylym" there is a souvenir shop. In it you can buy national clothes, skullcaps, Tatar gifts and Souvenirs. There is also a pottery workshop, where children and adults are taught to sculpt ceramic dishes, use a Potter's wheel, where you can learn the basics of pottery.

In "Tugan avylym" there is a restaurant, a pancake house with a real wood-burning stove, a guest house with a tatar steam bath, cozy guest houses. It will be interesting to visit the cultural and craft center "Mill", where visitors get acquainted with the weapons collection, kitchen utensils and objects of Tatar life.

Masters show master classes here, offering to buy interesting things and household items, souvenirs as a keepsake. Master classes are held here: “Tatar costume”, where you can try on national clothes and take pictures in the roles of Khan or Syuyumbike. In the master class "Tatar hospitality" you will be treated to delicious Tatar sweets and talk about traditions.

The idea of the complex is very successful, everything inside is made in the national style, pleasantly pleasing to visitors, giving the opportunity to immerse yourself in a real fairy tale.